During our trip to Wales in February, we pushed our limits – cramming in as many locations as we could in the daylight presented to us. This wasn’t one of those holidays from which you return home feeling rejuvenated, refreshed and with new peace-of-mind. We were more exhausted than before we left. 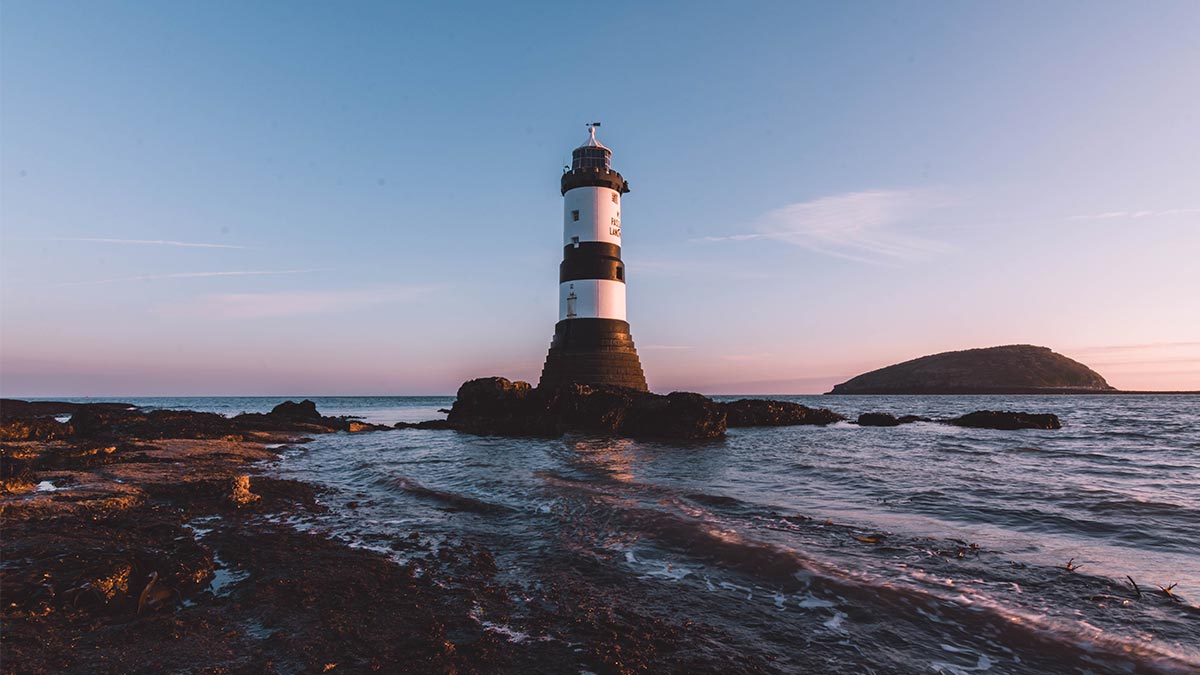 The sense of accomplishment alone was worth it.

We whistled through Anglesey in 12 hours, both setting out and returning under the speckled night sky. This left us with a rather streamlined itinerary, giving us chance to visit only the locations we deemed a “must-see”: the very best Anglesey has to offer for somebody with no time to spare.

So, here’s my list of “must-photograph” locations in Anglesey if you only have day to visit.

Penmon Point and the Trwyn Du Lighthouse pinpoint the eastern extremity of Anglesey. The lighthouse, the aptly named “Puffin Island” and a single buoy jutt defiantly above the horizon, and make for many beautifully simple compositions.

In the pre-dawn light, the seaweed-strewn shoreline contrasts starkly against blue-pink hues to form a minimalist’s dream. Close crops accentuate the solitary lighthouse, whilst the three aforementioned components give the leeway to get more creative with wider shots and panoramas. A long exposure of the lighthouse at Penmon Point
Beyond the lighthouse itself, the shoreline and coastal formations are interesting, and I recommend spending an hour exploring the surrounding areas after shooting the obvious subjects.

A panorama of the Penmon scene
Note: While parking is free, the road to access Penmon Point is privately owned and, as a result, a manually enforced “toll road”. If you arrive before sunrise, you will be charged on the way out.
Location 2

Borth Wen and the Rhoscolyn Coastline

After breakfast, we ventured to Borth Wen with the aim of exploring the rugged Anglesey coastline. The drive was tough, consisting mostly of single track roads that seemed to tunnel between plots of farmland.

Borth Wen was small and pleasant enough. But the real prize lays to the West. A large sea stack juts out of the water at Rhoscolyn
We spent hours here, enjoying the sheer force of the ocean: it’s sculpture the brutal cliff faces and isolated formations A clear view to the horizon
Our weather was overcast, but this location would excel in warmer, evening light.
Location 3 The renowned lighthouse at RSPB South Stack
Yep, the obvious choice. RSPB South Stack is popular among photographers, birdwatchers and tourists alike – and with good reason.

On the North-West coast of Anglesey, this lighthouse shines during (and after!) sunset. There are four approaches to the lighthouse and the surrounding seascape:

From above – from the car park, you can embark on a short climb to a small shelter and capture the scene in full. Steph for scale
From the RSPB “hut” – this side-on view isolates the lighthouse and it’s sea-cliff perch. From the RSBC hut
From the car park – if you don’t fancy the climb, you can pretty much shoot the lighthouse from the car park, just position your tripod close to the wall and fire away. From the car park
From eye-level – this is probably my favourite composition, and we intentionally left it until after the sun had set so that the lighthouse would begin to illuminate the scene. The only downside being the 400 steps back to the car – in the dark. From eye level
There’s far more to Anglesey than these three locations. Given the chance, I would have many more, less well known, spots to share with you – but as pressed for time as we were, these three spots gave us everything we wanted from our first visit to the Holy Island.

After spending most of the trip embedded in Snowdonia’s mountain ranges, we travelled to Anglesey for dramatic coastlines, iconic scenes and most of all: the ocean. If you’re looking for the same and pushed for time, consider these amazing, “must-photograph” locations for your itinerary.

But most importantly, get creative, get off the beaten track and find that hidden gem of your own!

Quick tips for getting around Anglesey

Back to the blog

Finding The Trinnacle at Dovestone Reservoir

About meSustainabilityHelp and FAQsContact me